June 22 - Holy cow.. shows are a ton of work and I have to be honest, I don't put as much into them as most people. Haha. We hit two shows June 12 and June 19. Carolyn of Sonup 2 Sondown Farm put on the first annual Green Mountain Buck Bonanza in Lyndonville, VT and it was great!! We brought four bucks and had a great time. We also got to Southern Vermont Dairy Goat Association on the 19th in Marlboro, VT. That was also very fun but a super long day as we had no Senior does to show and Alpines were scheduled second to last! After arriving at 7:30am and getting home at nearly 7pm... We're pooped!
We're probably going to sit out the rest of the doe show season as the comments are fairly consistent on all of our animals and the competition is fierce. Next year, when the girls are in milk we'll be a bit more competitive.

Check out our Breeding and Sales Schedule! If you'd like to reserve a kid please email us. You'll see a notation appear in the schedule upon confirmation. 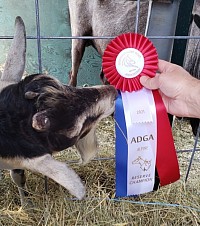 We've decided to post a running Google Sheet of show results for the curious. We're very data oriented here so having a visual to compare each year might be super helpful in seeing how the different doe lines develop in the show world. We will just continue adding pages to this sheet as the years progress and see where it goes!

You can check that out in a new window here...
Topolino Farm Show Results

You can also check out a collection of random, sometimes goofy pictures from our shows! These shows wouldn't even be half as fun without the super awesome people we get to hang out with and learn from!
Show Times!